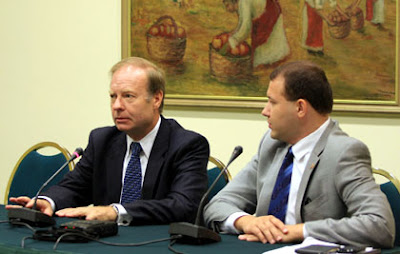 Την ίδια στιγμή που ο πρωθυπουργός μας έχει ....ξεφτιλήσει τον όρο "διακοπές στα ελληνικά νησιά" και το μαύρισμα του είναι πιο έντονο ακόμα και από αυτό της Όπρας, την ίδια στιγμή στις ΗΠΑ υπάρχει κίνηση συνεργασίας Τούρκων και Σκοπιανών εναντίον της Ελλάδος και της Αρμενίας. Τα εθνικά μας θέματα πλέον στην κόψη του ξυραφιού και βέβαια στα στιβαρά χέρια του part time πρωθυπουργού μας και του φον Δημητράκη Δρούτσα!
Για τους αγγλομαθείς αναγνώστες μας το παρακάτω άρθρο που μας έστειλε ο συνεργάτης μας Peter.
Turkish -Macedonian coalition in the United States against the Greek- Armenian
Macedonians and Turks who live in the United States, for several years performing together in efforts to secure the objectives of common interest - for Macedonian membership in NATO of the country and preserving the constitutional name, the Turks - a broader support.
The joint appearance in the field of human rights, because, as he says Meto Koloski , the head of the United Macedonian Diaspora, our problem is the same - in Greece are not recognized or Macedonian, or Turkish minority.
Cooperation with the Turkish community in the United States has started since 2004 , when the newly formed United Macedonian Diaspora has made the first contacts with representatives of the Assembly of Turkish American Association in the U.S., which is a unifying body of Turks in America. The specific cooperation then continues with the Turkish Coalition USA , an organization that lobbies for membership of Macedonia in NATO and the preservation of the name by which financial support was achieved and the visit of U.S. congressmen fifteen Macedonia week.
They opened our doors in some congressmen where we can just go and say the Macedonian position. But we help them to meet with congressmen who are not affiliated with the Turkish community , and we realize we are already co - says Koloski .
The Macedonian- Turkish cooperation in the United States and obviously compete Greco -Turkish .
Mathematics from the U.S. Congress, which has 435 Congressmen, looks approximately like this : 120 congressmen supporting the Turkish positions , 148 Greek , 170 Armenian and Macedonian 30-40 year congressmen. In the case of joint , the attitudes of Macedonia have the support of some hundred and fifty congressmen. It is support that is rarely transformed into concrete initiatives, but not for neglect .
In 2004 Koloski summarizes the process of gaining support in Congress had only two congressmen who had supported the Macedonian position.
- Last year it got about fifteen congressmen , and this year can now talk about 30-40 Congressmen who stand behind Macedonia's position and clearly expressed , lobbying for the country. Among them is Congressman Bill Paskrel , which , in turn , is in the Turkish lobby. In 2009 fifteen congressmen led him sent a letter to U.S. Secretary of State Hillary Clinton, which emphasized that Macedonia is one of the most trusted partners and the United States. They urged the U.S. administration to prerazgleda Macedonia's contribution to stability in the South Balkans and the contribution of the country in meeting the objectives of U.S. foreign policy in Afghanistan , Kosovo and the Middle East - said Kolovski .
In this letter , inter alia , indicate several important aspects.
"As you know, Macedonia declared independence from former Yugoslavia in 1991 . Since Macedonia passes through peaceful transition from communist state in a stable multiethnic democracy. The country suffered unexpected difficulties in the process of recognition of its name by a neighbor. In the name of Macedonia, Greece argues that the term Macedonia implies territorial claims on Greek territory. Government of Greece maintains his position despite some public statements by the Macedonian government, including an amendment in the Macedonian constitution which says that Macedonia has no territorial pretensions towards any neighboring state, " the letter said .
The first Turkish -Macedonian specific activity in the United States is reached in early 2008 (when the country was to receive an invitation from the Alliance ), when the Turkish diaspora through a letter to then U.S. president George Bush and several Congressmen indicates that Macedonia should join NATO . The invitation that year was left out because of the dispute with Greece.
Activities continue , and especially activated this year, in anticipation of the November NATO summit , which this autumn will be held in Lisbon. Both organizations, except in the political part, cooperate in other areas. They are awarded scholarships to Macedonians living in America for education in Turkey , there are regular meetings to spread the network and so on.
10:33 π.μ.
Ioannis Nikolopoulos
Αποστολή με μήνυμα ηλεκτρονικού ταχυδρομείου BlogThis! Μοιραστείτε το στο Twitter Μοιραστείτε το στο Facebook